The wait is over, and just in time for Thanksgiving the West Hartford community will get its taste of the unique confectionary delights that are “crafted with love, covered in crazy” with the opening of Donut Crazy at 993 Farmington Ave.

“We are really excited,” said Jason Wojnarowski, who founded Donut Crazy in 2011. “The community here has been really patient.”

It’s been more than a year-long wait since Donut Crazy announced its plans to open, and the West Hartford community will find plenty to be excited about – including an array of doughnuts in traditional as well as “crazy” flavors. There are glazed doughnuts, chocolate cake doughnuts, cinnamon sugar doughnuts, blueberry cake doughnuts, and crullers on the “daily” menu. All are far from ordinary, and are hand-forged, made overnight in Donut Crazy’s central kitchen in Stratford and shipped fresh to each location before dawn each morning. 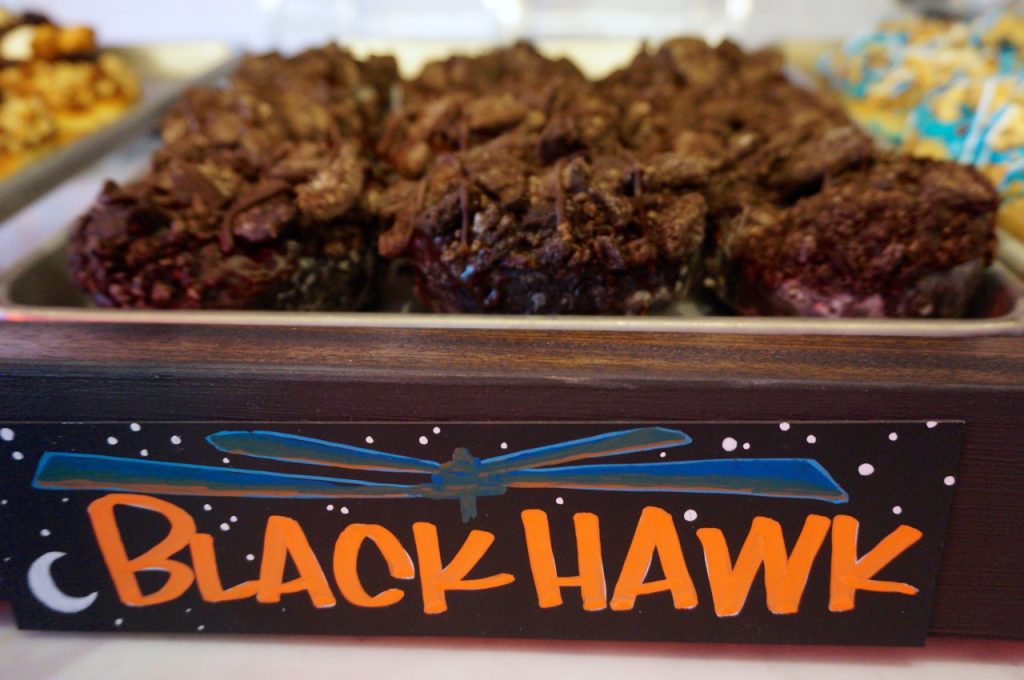 The Black Hawk is one of the ‘crazies’ and is a chocolate glazed cake donut topped with chocolate icing, crushed cookies & cream, and drizzled with more chocolate. Photo credit: Ronni Newton

The “crazies” are a new breed of decadent, with names like Kookie Monster (touches of bright blue and an ample sprinkling of Chips a Hoy cookies), a S’Mores doughnut complete with a mini Hershey bar, a cannoli doughnut, and a maple bacon doughnut.

There’s also a pop tart doughnut, in flavors that vary with the season. Pumpkin is the current flavor, but other choices will be strawberry, Nutella, and brown sugar.

And if you’re unprepared and need to bring dessert for the Thanksgiving holiday, there’s even an Apple Pie doughnut.

Wojnarowski said that the doughnuts can be so large because they are cut by hand, and the only thing at all automated is a portion of the fry process.

How many calories does each doughnut contain? “A few” was the response..

Wojnarowski said he knows that most people can’t eat a doughnut every day, so there are other items on the menu. “We also serve killer breakfast sandwiches,” he said. The same menu is available all day, with offerings like avocado toast; bacon, egg, and cheese, or the “Barnyard” (eggs, ham, bacon, sausage, hash browns, and cheese). The sandwiches can be served on wraps, hard and Portuguese rolls, English muffins, or bagels.

Who needs to wait for the Big E when you can find a bacon cheeseburger nestled between two glazed doughnuts on the menu in West Hartford Center.

Also available, and baked in the Stratford kitchen, are scones and muffins.

“We also have cookies, really big and thick cookies,” Wojnarowski said. Chocolate chip is a staple, and other flavors rotate with S’Mores currently on the menu.

There are on-tap beverages that will interest even the youngest family members, with offerings that include plain and chocolate milk, There is also fresh orange juice, coffee (Sharewater Coffee has created a special breakfast blend for Donut Crazy), cold brew coffee and tea, and Nitro coffee from Rise in Stamford. 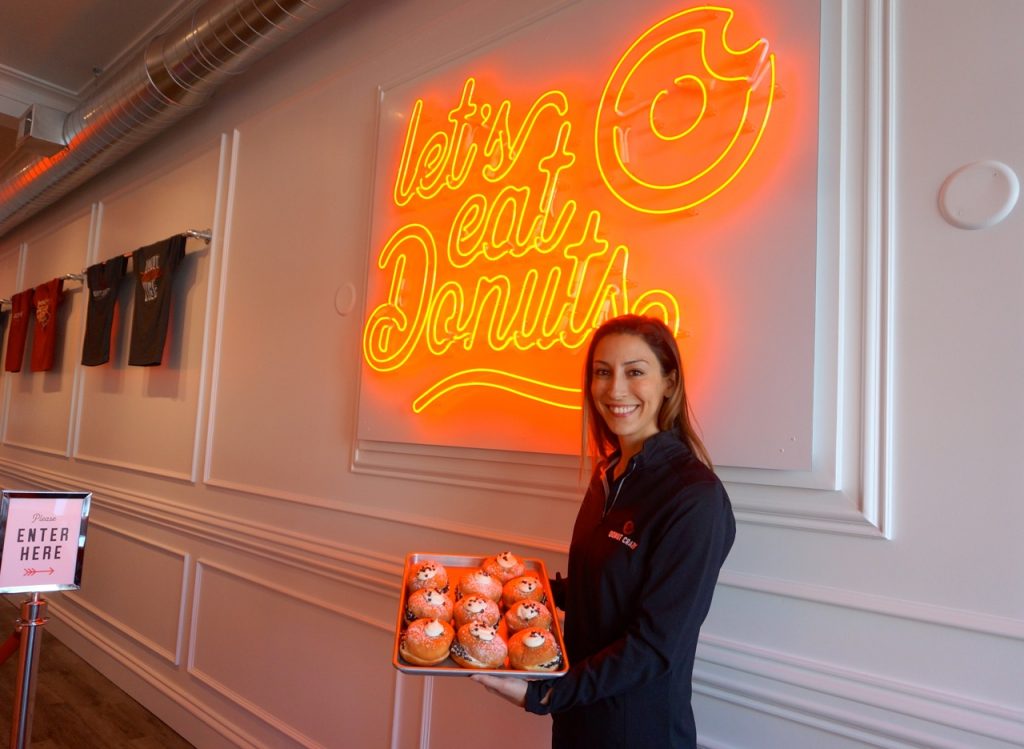 Wojnarowski started off opening company owned stores, but the recently-opened Westport location was the first one that was franchise-based. West Hartford is also a franchise location, and is owned by Glastonbury resident Irene Luaices and her husband, Cesar.

“We are thrilled to be here,” Luaices said. “We are excited for this community.”

She and her husband have three daughters, ages 6, 4, and 2. “We joke that  this is my new baby,” Luaices said.

Luaices will be in the location most days, and her father will also be working there. They will employ 10-12 people.

Some special plans for the West Hartford location include a contest to create the next pop art piece, as well as planning for a “We-Ha” doughnut or sandwich.

There is seating for 15-18 at the tables and bench seats inside Donut Crazy, and Wojnarowski anticipates that take-out will be a popular option.

Catering is available, and can even include “mini” 2-inch doughnuts, which are available in most flavors.

Do you really want to delete card?

This process cannot be undone.

Card has been deleted successfully.